A downloadable game for Windows, macOS, and Linux

"Safira thought she had hit her lowest point after her "newfound" sister starts to create drama at school. But once she invites her aspiring friends to a slumber party she realizes that danger awaits her only one digit away."

A short Visual Novel that uses horror as a narrative device to touch on topics such as bullying, troublesome family relations and the importance of friendship.

This game contains 3 different endings, your choices will determine which ending you'll get.

This game was made for The 2nd Spooktober Jam on Itch.io Hosted by Remort Studios, Crystal Game Works. We want to thank this opportunity and say that we are very happy to be part of this Jam, with our first visual novel game.

A game by: MustacheSkulls Games

Written and programmed by: TeasingMasterVi

Quick update 10/01/2020: Fixed error in the line 101 chp5, now if you choose to ignore Amber the game shouldn't crash.
Update 10/28/2020: Sophie's name will not appear in the scene before the party.
Now the game has a desktop icon.
Reworded the choice: 'Amber is wrong' and 'Appease the A+squad' to 'Side with A+squad' and 'Side with Amber'.

Side note: We are aware that the ending screens don't have a break, we plan to change it in a future update soon.

For MAC:
If you are running iOS and are experiencing problems opening game with an error related to your security settings, please see this Apple support article for a simple solution.

It was really good and would definitely warrant further development into a full-fledged VN.

Thank you sm for your feedback!

I really enjoyed playing this! The art style was my favorite part, for sure. I liked how the A+ Squad all kind of had their own personalities and interests and weren't one-dimensional 'mean girl' characters. Very nicely executed overall.

Thank you so much for your kind words, We're happy to hear that you enjoyed the game 🤗

This was a really cool game! The Art style is vibrant, the characters all had fun and distinct personalities, and the story and mystery of the phone kept me invested the whole way through.

I kinda wish Amanda and Anne Marie were more involved in the Good Ending since they felt a little shafted there. Otherwise I really enjoyed this experience!

We're glad you had fun! Thank you for leaving a comment 😁

such a cool game!! any tips on getting the good ending?

Thank you sm! There's a tutorial on the game's page but lemme get it for you:
TBN Endings - Tutorial

thanks! that was helpful /g

The save doesn't work though (playing on mac)

I can translate your game into Spanish, if you wish.

Once again thank you for playing our game <3

i like how this games characters look , their really unique and the characters, backgrounds, and story feel real. The different endings are fun to, nice work

Thank you so much, your comment means a lot to us. We are glad you enjoyed the game!

dont mention it and am glad you care about my comment!

Loved it! I got all three endings, but if there was a scene that ever explicitly said what happened to sophie, i missed it. Is there dialogue I missed that goes into that, or is it kind of just implied?

Thank you sm we are glad you enjoyed the game ^^

It is implied, but to answer your question she did in fact Her spirit was connected to her phone which Amber got at the store. They became friends and she wanted to help Amber since both went through similar things regarding to bullying.

In the good ending her spirit is set free, in the neutral ending she is still connected to the phone but haven't made contact again yet, and in the bad ending she continues to be friends with Amber.

Thanks for the reply! Yes, I definitely figured. I think that part was made pretty clear, (arg I wish itch had spoiler text tags LOL, if you haven't played yet don't read this) especially the "rest in piece" on the bathroom wall helped with that I think; I guess that's the curse/incident with that bathroom, that's where she did it.

I was more curious as to her bullying story and hearing what happened there, you know, how long ago it was/about her bullies and what they did or what she was being teased for. It's definitely not a complaint though, the basic facts of her story are made pretty clear I think. I was just wondering about it because I was interested in knowing some of those details about her backstory.

Great job on this game though, seriously, especially since it was made in just a month. I've only ever worked on Ren'Py games by myself, so I know working with a team definitely helps make that easier, but it's still a crazy feat to me LOL, especially with the great quality of character sprites/graphics you guys have, and what I found to be a really nicely robust path structure. My first natural playthrough brought me to the neutral ending, which initially surprised me; from the choices I had made I could tell what was gonna give me the "bad" path, but I wasn't expecting that I got a "neutral" path, and going back and figuring out how to get the true happy ending was really well done I think.

It makes us really happy to hear that you enjoyed the game! We heard a lot of people talking about which route they took and it really was our intention to make it somewhat challenging to give the game a replay value, so I'm also happy to see that it's something people enjoyed.

About Sophie's story, so far there's no dialogue or scene that goes into it...but maybe in a future we could make a dlc or update the game with a special scene, who knows, but it's an interesting idea ^^

Definitely! I think if you were ever to make additional content for the game, that kind of extra scene would totally be the thing to do. But I totally enjoyed the game as it stands! And appreciate that finding all three endings didn't just rely on one single choice (so it wasn't too easy), but it also wasn't too crazily hard either.

Thank you so much! We are glad you are enjoying the game so far :D

I really liked the game, it was pretty smooth and nicely made, especially for game which was made in just one month. the sprites were really nice too, i enjoyed how they depicted how the characters felt :D

just a quick question though, i've been playing the game for a bit and i've managed to get 2 endings, the good and bad one but i can't exactly figure how to get the third ending which i'm gonna suppose is the good one so might i know how to actually get it? I'm quite curious as to what it'll be to be honest

First, we are glad to hear that you enjoyed our game, your comment means a lot to us!!

And second, we plan to post a tutorial on how to get all endings soon. So stay tuned ^^

We updated the page with a doc on how to get all endings! :D

Thanks a lot, I'll check it out!

THE ART! THE STORY! Not to mention this is a really smooth game for something made in ONE MONTH! Hot damn, this was good.

Thank you sm for you kind words, We are glad that you had fun!

Awesome game, was very interesting, well coded, and the art was phenomenal.

Thank you!!! We are happy that you enjoyed it :D 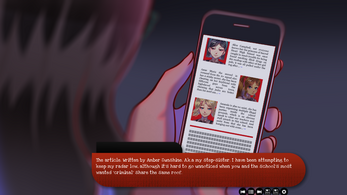 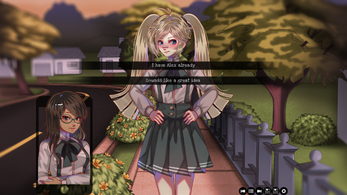 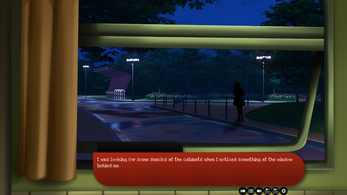 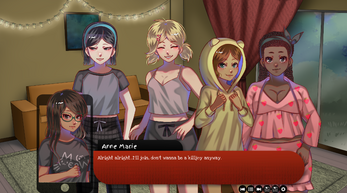